And here is my paternal grandfather’s signature. 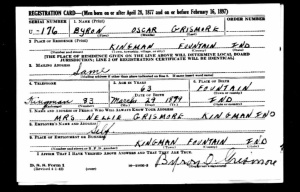 At the bottom, beneath all the facts, is my maternal grandfather’s signature. 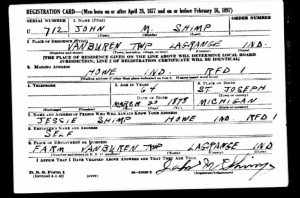 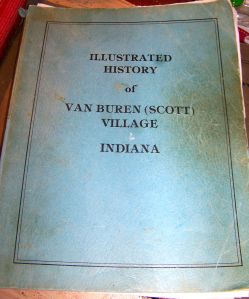 I found this picture inside. It was from some high school year when I wondered what my hair would look like dark – not a good idea. Robert Grismore and his daughter. (Daddy and I – grammatically correct, but Daddy and me sounds better.) 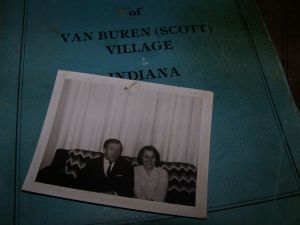 We had a dog named Socrates when I was a little girl – not my mothers idea; my dad and I were the instigators. He was a cocker spaniel and he won some dog shows awards. Mother came round and for decades we had this on our mailbox. And for this picture, it’s resting on the nicked flag table in my living room. 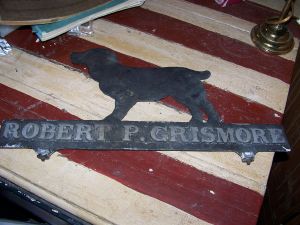 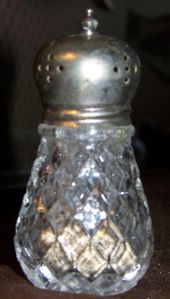 Well, this is from God Knows When. I guess I could polish the top a bit. 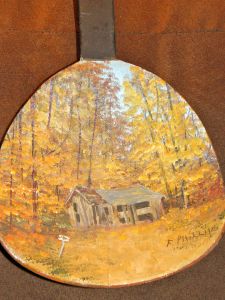 My mother graduated from this school in 1944 in a class of eight. My father, Robert Grismore, taught here after the war and I believe my mother’s niece, Ruby Boehmer, was in his sixth grade glass. I don’t know if Freddie, her brother, was an actual student of my dad’s or not.

I have pictures of Freddie and Ruby – as young kids and young adults. I’ll post them later under a post title that specifies that. I always thought of the picture of Freddie and Ruby when they were kids when I read my first Bobbsey Twins books. The younger twins were Flossie and Freddie and I imagined them looking just like Ruby and Freddie. I have to admit Ruby seems a better name than Flossie, however. In fact, I don’t think I’ve ever known of a real-life Flossie. I’m going to have to Google that.

Ack! I almost forgot to include the school picture. (It’s on a brick from the school, by the way, which was torn down some time ago. I still refer to the site as “up to the schoolhouse” and sometimes my grandkids think I’m losing it. They could be right.) 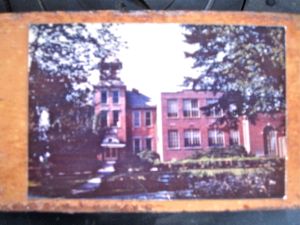 The Peanut Butter Cafe & Roadhouse has strange things sitting about. I started staring at this toothpick holder the other day . . . and he has teeth! I think this fellow is what is known as an Anri figure – but I’m really not sure. I’ve seen him for a good part of my life; I guess I thought everyone had a little man with a big mouth who held toothpicks . . . but I just now realized about the teeth. 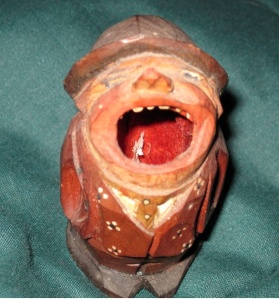 Welcome to WordPress.com. After you read this, you should delete and write your own post, with a new title above. Or hit Add New on the left (of the admin dashboard) to start a fresh post.

I've set aside this place to note for myself and my family the things that i have come across following my parents' death. Sarah Shimp Grismore was my mother and by using her name I have included the two family names that are not shared by a large part of the population.